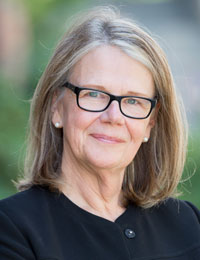 Deborah Buszard held senior appointments at Dalhousie and McGill prior to leading UBC’s Okanagan campus for eight years. Achievements during Buszard’s time as Principal included building new and enhanced community partnerships throughout the region; a 150 per cent increase in annual research income; publicly committing to five actions on Truth and Reconciliation in collaboration with the Okanagan Nation Alliance; and surpassing 10,000 in campus enrolment.

A plant scientist and strawberry breeder, Buszard holds an academic appointment as Professor of Biology in the Irving K. Barber Faculty of Science on the Okanagan campus. A historian who held senior leadership roles at the University of Alberta before coming to UBC as Principal and Deputy Vice-Chancellor, Doug Owram helped grow the new UBC Okanagan campus in the years just after its creation. The student population doubled at the Okanagan campus during his tenure.

Owram is currently Professor Emeritus, History, in the Department of History and Sociology of the Okanagan campus’ Irving K. Barber Faculty of Arts and Social Sciences. McBride is Professor Emeritus, Microbiology and Immunology, in the Faculty of Science at UBC’s Vancouver campus.